Vendetta Couture - Who we are

Vendetta Couture is the culmination of years of study, hard work, design and preparation that led Sian Vendette, it's founder, to start her own designer dressmaking house in 2006.

This is a story of one woman and her sewing machine. Even though you will read on this website about we here at Vendetta Couture, it is the designer and dressmaker Sian Vendette who designs and creates everything, but we are a family team consisting of web designer partner, and an 8 year old daughter who is a handy pin picker-upper and thread collector. 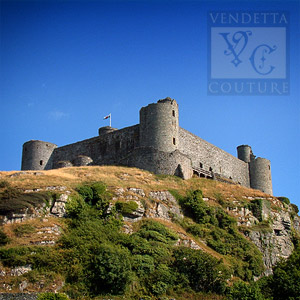 Vendetta Couture, from the wild welsh coast... and now to the heart of France

...So back to our story. Sian was born and raised on the north west coast of Wales, close to the little town of Harlech. Although Welsh is Sian's first language, she is fluent in English and Welsh and is learning more and more French by the day following the relocation from the UK (United Kingdom) in 2011.

When you grow up in such an inspiring landscape with rugged mountains, beautiful beaches and the ocean, castles, stone cottages, ancient myths and legends are easy to imagine and these provided the early inspiration for her designs.

Sian's love of sewing combined with her keen interest in history, period costumes, architecture, art, especially pre-raphaelite art (such as J W Waterhouse), nature and the natural world strongly influences her creations. Thus creating designs that have a romantic and faerytale quality.

Over the years Sian has travelled and lived in Wales, England, Cyprus, Canada and now resides permanently in France after settling there in 2011 with her family. Arts and crafts are certainly in her blood, her mother and Grandmother were keen crafters, turning their hands to crafts such as embroidery, tapestry, tatting, knitting/crocheting, dressmaking and even wood carving.

One of Sian's earliest memories of discussing dressmaking comes from a conversation she had with her very elderly grandmother when she was about 8 years old. Her Gran (or Nain as she was called in Welsh) told her a story of how as a child she would spend her summer holidays staying with her aunt and uncle in the sea side town of Bournemouth. There they ran a Haberdashery and Dressmaking shop. As a little girl, her Nain was not allowed into the main part of the shop so she spent her time peeking out from behind a heavy curtain from the back room. She told Sian of how the ladies would come to the shop to have fittings and be measured and that their waists were so tiny you could put your hands around them. That part was possibly a slight exaggeration but to a little girl it could certainly have seemed like it and Sian found herself fascinated with fashion styles from then on. One important piece of advice that her Nain passed to Sian, was the importance of finishing off all sewing to a very high standard, so that the inside of any item looks as tidy and presentable as the outside.

Elegant and creative dresses and gowns, custom made for you in France

At Vendetta Couture we make elegant and creative medieval dresses, wedding dresses and gowns and vintage style clothing for customers in the UK (the United Kingdom, where we were based until 2011), throughout Europe, including France, the USA, Canada, Australia and have customers in many other counties.

We have created alternative wedding dresses and gowns in medieval and vintage styles for that special day or occasion for over 12 years for many happy customers.

Our dresses and gowns can be made to size, or more often, made to measure from measurements our customers provide. We then send the items to our customers using secure postal services all over the world.

We believe in providing the best service we possibly can for our customers. We try our best to fit your individual requirements to our hand made clothing.

When you order a dress or gown from Vendetta Couture, we will keep you informed at all stages, we can provide a personal service that allows you to have a custom made to measure garment that is individual to you and will provide a cost effective way of shipping your purchase to you that guarantees that your item will arrive safely and in time for your special day or occasion.

We can provide you with fabric samples in advance to ensure that you get the best possible colour combinations and choice over quality of fabrics and provide photographs of any other items used in the making of your purchase.

We are proud of our work and the standard of both our workmanship and level of service is what our reputation rests on. We provide a range of quality and high quality fabrics, trims, laces and accessories that make a dress, gown or item of clothing created by Vendetta Couture comparable to other high quality fashion houses.

At Vendetta Couture our aim is to provide you with a high quality hand made item of clothing that you will adore!

In these days of mass produced clothing from various places around the world masquerading as couture, it is refreshing to find high quality, hand made clothing created by an artisan in her own workshop and delivered from there to the customer direct, without a middle person or a business either increasing the costs or putting their marketing spin on the clothing.

Some of our designs 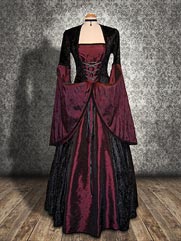 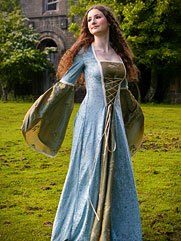 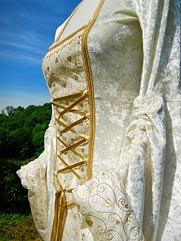 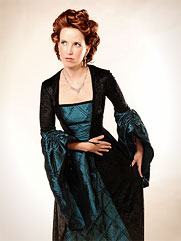